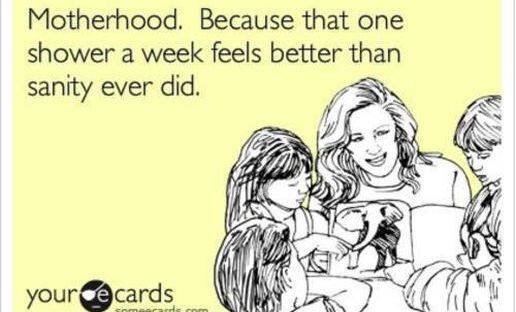 Let’s be real, the last couple weeks have sucked. Caitlin had the cold that shall not be named and it just would.not.go.away. It’s finally cleared up and she is her sassy, spunky self again! The hubs and I also “camped out” on the couches for a solid week because I (unknowingly) injured my neck and couldn’t move.  I was like a 100 year old trying to get around…I had to turn my whole body to look at something. This made caring for C while she was sick even worse. For whatever reason, sleeping on the couch was the only thing that felt ok. Weird, right? But we have since moved back to the bedroom and I’m pretty sure, despite his positive attitude, Dave heard angels sing when I gave the go ahead to pack up our camp 🙂

I’ve been busy sewing and making things for some momma friends that I’ll get photos up soon. In the meantime, I feel like sharing a few things I’m loving right now…

1) Babywearing
This is nothing new. I am obsessed with my daughter. I love having her close and have worn her since she was a week old in my homemade Moby, affectionately called the “Fauxby.”  It makes trips to the store easy, getting around crowded places a breeze, and a great way to induce a nap if she becomes a l̶i̶t̶t̶l̶e̶ ̶g̶r̶u̶m̶p̶y crying monster. I was reminded of how handy it can be while we were trying to get dinner together tonight and had a needy little babe who wanted up. Problem solved! Twenty short minutes later and we were chowing down on steak, asparagus, roasted potatoes, and french bread. Stop drooling.

2) Showering  & Sleep
I literally never knew a hot shower or sleep could be such a treat. I absolutely took advantage of this before Caitlin arrived. Despite her horrible cold, she somehow put herself on a new schedule of sleeping in and taking one long nap during the afternoon. She’s been sleeping from 8/9pm straight through until 10/11am. My mommy mind (and my boobs) don’t understand what is happening! You guys. I have actually woken up the last week JUST. BECAUSE. Not to her singing the song of her people and begging to be taken out of her crib. This is amazing! I actually have time (for now, you know, until she decides she’s been nice enough) to roll out of bed, make coffee, and take a hot shower.  Compared to the baby wipe shower I will admit to giving myself a couple weeks ago, this is a mother’s d-r-e-a-m!

3) Music
What? Hasn’t music always been around? Yep! Do you somehow forget things exist when trying to keep a baby alive, happy, and a house from burning down in the midst of fighting off every single new mom fear? Yep! The radio is often turned down in the car because I’m talking to Caitlin and, at home, we get so busy or distracted that I just forget that thought that used to say “Hey…let’s listen to some music!” I LOVE music. All types. We’ve been hanging out in the living room more so Caitlin has lots of room to play and now we put on one of the many music channels Cox has. In fact, this song came on and Caitlin had a blast with me singing it to her. I’ll spare you the pain…Colbie does such a better job 😉 I love the message it has.

An honorable mention goes to The Walking Dead. Dave and I finally jumped on the bandwagon and have been binge watching at night on Netflix. We are not caught up yet, but I have enjoyed most of the episodes. I would also be remiss if I didn’t give a nod to my trusty dry shampoo. It has gotten me through so rough many days!

What are some things that YOU are loving lately?

Mom, wife, crafter, & recovering perfectionist. Find me here telling my stories about drinking coffee and crafting my way through motherhood!

What are you looking for?

What do you want to read about?